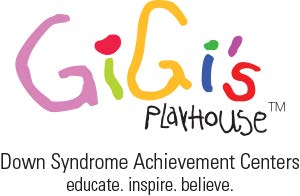 Gigi’s Playhouse is an organization created in 2002 by Nancy Gianna. Nancy gave birth to her
daughter Gigi, who had been diagnosed with Down Syndrome. This then turned into Nancy
opening the very first Playhouse which was created to be a dedicated place for families to
celebrate their child and benefit from free, purposeful programs that unleash joy, confidence
and continuous improvement. Now, more than 40 Playhouses empower children and adults
with Down Syndrome. Gigi’s Playhouse holds events every weekend, which you can find out
more about on their website! They also have many different locations nationwide including
Chicago, Arizona, California, Maryland, and more.

The event I attended focused on practicing active listening through music therapy and
improving fine and gross motor skills through arts and crafts. The children cut out letters of
their choice (yay for choice-making) on cardboard and then used crafts and colors to
individualize their letters to their liking. For this activity, there were about 5 volunteers who
were available to help the children, which allowed the parents to have a well-deserved
moment to themselves!

Much of the Gigi’s staff are volunteers. I had the chance to speak with two of the volunteers:
The first started out as a volunteer and eventually requested a spot on Gigi’s Playhouse’s
Associate Board. As an Associate Board member, he helps with events and operations. He
found Gigi’s through his own personal research and motivation: “I have a cousin with Down
Syndrome. He’s 10 months old and I wanted to get involved and help anyway I could because of
him,” said the Maryland native. This volunteer and I spent a large amount of time talking about
how Gigi’s has changed his life and what the phenomenal community they have built, while the
children were busy with their letters.

He wasn’t the only one who felt this way. I met a mom who said the same when we spoke: “I
love networking through Gigi’s (as everyone so lovingly calls them) on the weekend, because of
my son.” Her son was present at the event. He is very smart and friendly with everyone. His
mom often has to remind him to give the volunteers their personal space during the event,
because he loves to play with others and have them clap with him. During our time together,
she obviously knew the children by name, as did the other parents, suggesting that there really
is a strong community. I asked her if she knew the children or their parents through another
place, such as school or maybe her son’s doctor, but she assured me that, “No. I met all of these
kids and parents here! Through Gigi’s, crazy right?” I agreed. She also told me that she has
gained more support than she could ever have imagined for herself and her son. She looks
forward to all Gigi’s Playhouse has to offer and attends events in Brooklyn regularly.
The other volunteer I met started volunteering for Gigi’s because of her own interest in music
therapy. She wanted to use her talent towards something meaningful, she told me. “I started
searching for ways I could volunteer. I play instruments and sing. I found Gigi’s and this is now
my third or fourth event with them” she said. She proceeded to get all of the children in a
circle for interactive acoustic renditions of the ABC’s and Puff the Magic Dragon.

I enjoyed this event so much. If you are seeking community for your child with Down
Syndrome, or any type of special needs, I strongly urge you to attend events like this one. Even
for parents who is seeking support, these workshops clearly provide significant community
support systems, for yourself and your child.

If you would like to find out more about the Gigi’s Playhouse organization you can visit their
website for more information on events they hold, their mission, and a complete list of their
playhouses around the world! (Yep, they’re international). You can also keep up with them and
on on social media, @gigisplayhouse on Instagram & Twitter Gigi’s Playhouse, inc on
Facebook.